Well we danced the night away (literally) and so the farm has the air of the morning after the night before. However I am up bright and early, actually feeling bright and raring to go, not convinced that this feeling will last all day but let's strike while the iron is hot.

Later on my extended family will be getting together for a lovely barbeque to be able to sit down and chat, relax a little and swap stories from yesterday, I'm looking forward to it so I thought I would tackle today's challenge before it starts.

A couple of months ago I had spotted a beautiful papercut in a friends house and wondered if this would be something I had the patience for, turns out it is trickier than it looks but I'm pleased that I stuck with it and persevered. Yesterday at the church I managed to take a sneaky photo of my niece and her husband as they lined up for the official photographer and thought it might make a good subject matter. A bit of research on the internet gave me some handy hints and I set about cutting. 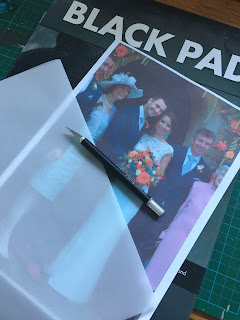 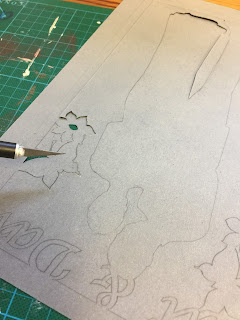 Yes, it's fiddly to do and my finger now hurts after all that cutting, but I am pretty pleased that I didn't over cut anything and now the final piece is cut from a single piece of black paper without a break. 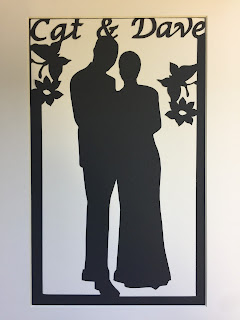 I've mounted it up for them and will give it to them later at the barbeque, I hope they will let me borrow it back for the auction but of course, it won't be included in the sale and they won't be able to take it back to Australia with them. I'll leave it in their house for when they move back next year, hopefully a lovely reminder of the first day of their married life together.
Posted by Unknown at 09:44