Earlier in the year when my husband and I had a bit of time off together, we found ourselves in Brighton, a place we love to pick around the Lanes and find some hidden gems. I picked up an autograph book, purely because my love of the theatre and film was suggesting that there might be an undiscovered nugget inside it's pages. 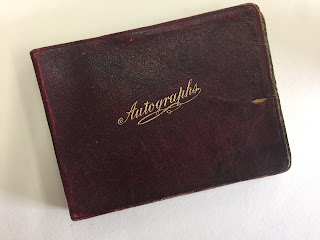 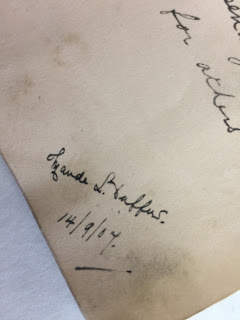 What I actually found was a snapshot of a 17 year old girl from 1907 who recorded her thoughts and dreams through little poems, anecdotes, signatures and drawings. We sat up until late into the night last night trying in vain to research who she was and where she was located. I had forgotten how time consuming this type of research is but it fascinated us, sadly our research didn't amount to much, I think that's a project for another day. If I'd had weeks to look at it then maybe I may have found something different but what it did do was get me thinking - what is our modern equivalent?

It surprised and slightly saddened me to realise that it's Facebook. Yes, I know there will be some of you out there who will have groaned inwardly and muttered under your breath that social media is everything that is wrong with the world but I disagree. Look at my lovely surprise yesterday and you will understand that while I understand people don't like it, I think it's a marvellous thing. Facebook is the place where I 'check in' to my favourite theatre performances, 'tag' people in to memories and jot down my thoughts for the day. I'm slightly sad because it's digital but this was the starting point for my project - could I re-imagine the Facebook entries back in to book form for a future generation to see?

Yes, I had a day to do it and I was under no illusion that this wasn't going to be a grand work of art but Thirty Days isn't about that, it's about stepping out of your comfort zone and daring to imagine something new.

I started by taking some of my Facebook posts and playing about with them in Photoshop, making them look vintage or turning them in to a line drawing to be tinted by hand and I don't know why but I had the idea that they needed to be sewn together. Three sewing machines, one hissy fit and a great deal of internet searching later,I found a way of stitching paper together. Don't ask about the hissy fit....

So below are a few shots of the work in progress, it's not perfect, it's not finished and if I had plenty of time, I'd probably be taking it apart and doing it again but it is what it is and I'm glad the challenge has pushed me to see it through rather than hurling it across the studio which is what nearly happened. 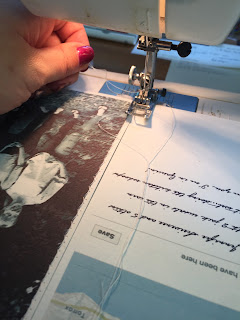 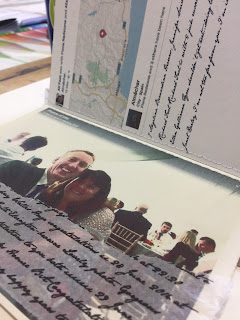 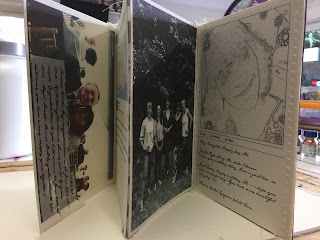 I may have time before the end of the month to do a little more work to it but you'll just have to watch this space. I'm off to write 'Need to learn about sewing machines' on my lifetime to do list, see you tomorrow.
Posted by Unknown at 18:11