Today's project has a long story attached so please make yourself a cup of something and sit down with me while I tell the tale of today's project. I'll get to the art, I promise.

As a well prepared artist, I pride myself on always being prepped for a project, this was primarily the reason that Thirty Days was always going to challenge me, I don't exactly do 'go with the flow'. However, a tiny part of me was looking forward to being given permission to change my plans and see what happened, and this is the story of today's project.

While staying at my parent's house, my Dad had left me a small selection of objects to experiment with and this was one of them: 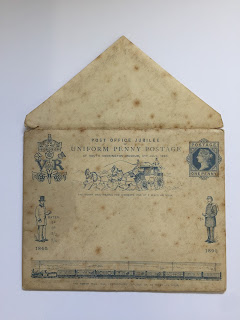 A postcard and envelope from 1890 that celebrated the jubilee of the penny postage - yep I don't know what that is, I forgot to ask my Dad but some of you out there may know.
As an aesthetic object, it is simply beautiful and felt a bit sacrilege to cut up to use as collage so what could I use it for? Continuing to peruse the family letters in Mum and Dad's archive, I unearthed this little gem: 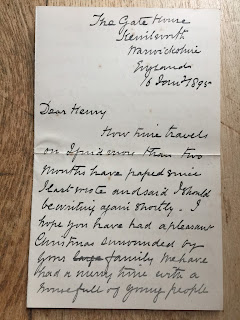 I knew from speaking to Mum that this had been written by one of my ancestors while they lived in the gatehouse to Kenilworth Castle and I had no idea what this building actually was so took to Google to see where they had lived. Er, hang on a minute, was this true? The house built by the Earl of Leicester to woo Queen Elizabeth I? Looking at this building and it's history made me feel a bit humble and where on earth was I going with this? As you can see from the letter it had been written in 1895, five years after the date of the postcard that Dad had left for me, this seemed too good an opportunity not to marry the two things together so I wondered about challenging myself to paint directly on to the postcard (gulp). It is so beautiful and so SMALL, could I do this?

While pondering the enormity of the challenge, I found myself flicking through images of the gatehouse and realising that I didn't have access to anything that was copyright free so I was a bit stuck. In looking at the origin of the images, I came across the blog of authors RC Bridgestock (their website can be found here) where in 2012 they had written a post about travelling around the country as research for a novel and there was a beautiful photograph of the gatehouse.
Being my cheeky self, I resorted to Facebook to get in touch with them and ask if they would let me have permission to use it and they came back to me almost immediately to say yes! Which just goes to prove that if you ask for permission to use an image, you usually get a very positive response and to date, I have a 100% record in asking and being given permission every time.

So, here is the photo that they kindly allowed me to use: 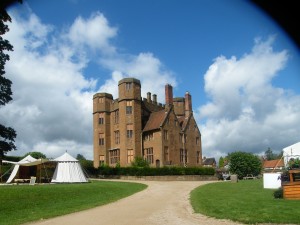 and here is the painting that I ultimately produced combining all of these elements together: 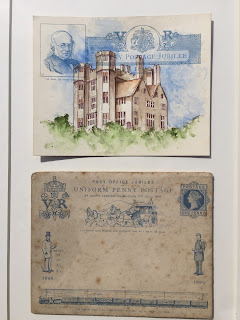 Apologies for the quality of the image, I was so eager to share this with you and write about it that I just rushed outside to photograph it. I will get a better image later on in the event, I may even turn this one in to a greetings card if I still like it in a few days time.

It is small though! I nearly sent myself doolally drawing it...but that's kind of the point of the challenge isn't it?