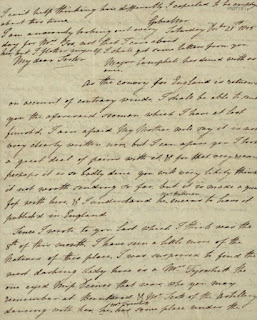 The whole point of being an artist is to investigate and that is what has found me here, creating a blog which may or may not be interesting to people but to have the chance to invite people to interact with my work.

So, the story so far....Last year I discovered that an ancestor of mine (Susannah Maria Middleton) had a series of letters that were in the collection of the National Maritime Museum, Greenwich, which detailed both her journey from Portsmouth to Gibraltar and the life she found when she arrived there. The letters are written to her sister and provide a fascinating insight into the social life of a young woman in 1805.
These letters provided me with an incredible amount of inspiration which is sustaining me and inspiring me a year later. I have used them in a variety of ways to test my practice, some of which were a triumph and some a disaster but it has all been fascinating and that is what has led me here.


At the moment I am planning to propose two pieces of work for my second year major project entitled 'Content and Context' where we are being asked to create work for the Lower Gardens in Bournemouth and our lead artist Emma Purchase planted the idea of running a blog alongside any work I produce.
So, hopefully there will be a lot to read about as I go about working out what I do and how I do it and you might even be part of it by participating and interacting!
Posted by Unknown at 13:31